Exposing your little one to a variety of textures and sensory stimulation, sensory boards are not only classified as educational, they are wildly entertaining as well. What's great about this project is that you can use items that you already have around the house! The main thing is providing things to look, touch, and feel- soft, bumpy, shiny, rough, etc that can be fixated down securely. As with any play, you want to make sure you give them plenty of time to discover the different things on their own but with direct supervision. 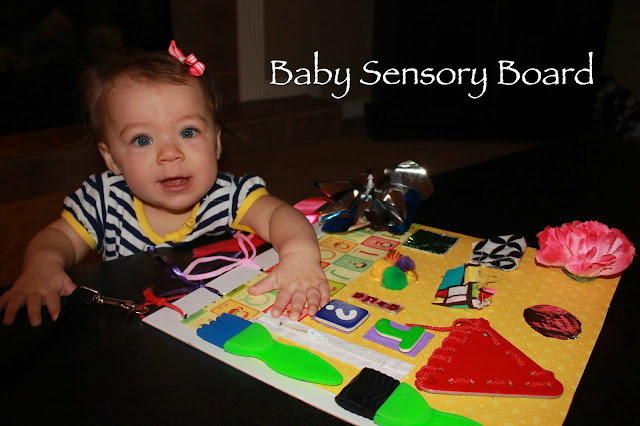 How to get started:


The Finished Sensory Board: 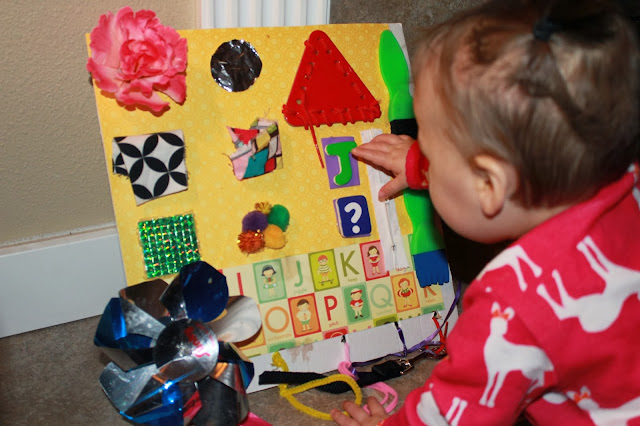 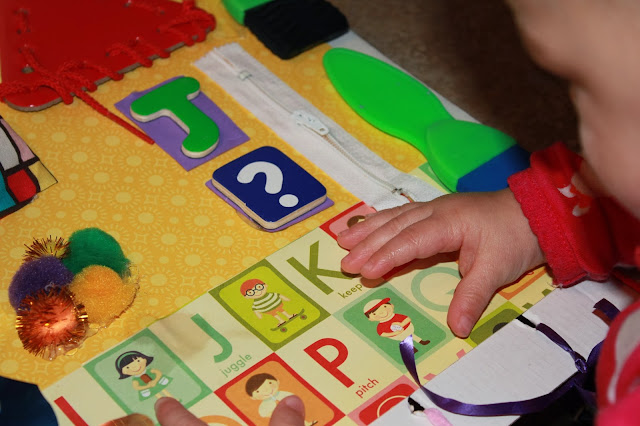 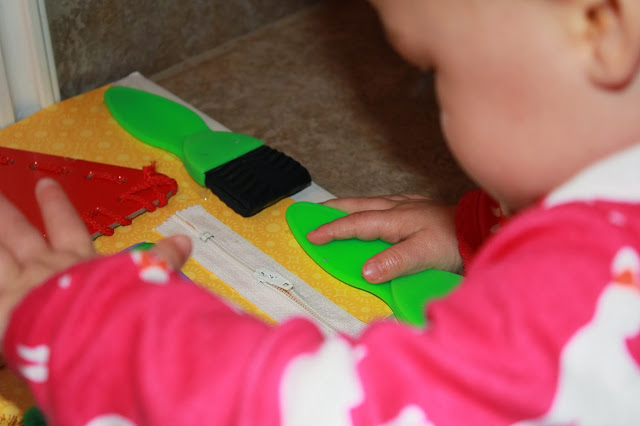 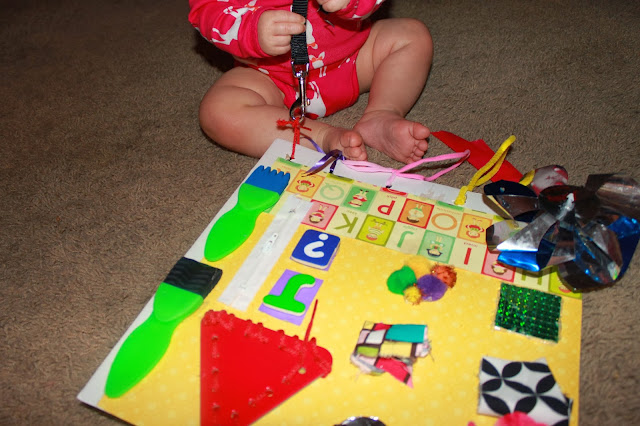 It has been such a hit around here that the older girls wanted to make their own boards too! We will have to share what they came up with as they used things that were challenging for each of their age (preschool & elementary). I may just name them Bored Boards!
Posted by Lulu at 2:25 PM 0 comments

Email ThisBlogThis!Share to TwitterShare to FacebookShare to Pinterest
Links to this post
Labels: Child development, DIY, Kids corner, Sensory board

Sexual Abuse: A girl's journey to finding her voice

This. This is a hard one. A post that makes it hard for me to swallow. Hard to breathe. Hard to be vulnerable and share from a place of STILL healing rather than being completely healed. A place where I can't say that after all of these years, I am not still in the trenches, dealing with the aftermath of a war in which for so long I felt my only choice was defeat. For deep down I was damaged goods and had somehow deserved such a status even if it was one that I had only given to myself. So here I am sharing from a place of transparency rather than expertise and that is HARD for me in and of itself.

It started small. As a young girl, in the form of unwanted touches in-between the halls. Unbuttoning my blouse somehow so slyly in a classroom full of people and yet no one saw. And yet I said nothing. I had had a crush on him so maybe I had asked for it? Because I liked him. I meekly tried to ask him to stop and he did not. My voice didn't matter. At that moment, my innocence felt taken from me.

Then there was the supervisor. The one that was more than twice my age. But he didn't really mean what I thought he meant right? He worked with children and everyone TRUSTED him. I trusted him. He told me that he "wanted to do...you know...what boys and girls are supposed to do" as he cornered me all alone. Had I asked for this again? I didn't want to make waves but felt as though I needed to speak out for other kids' sake. If he was saying these things to me, was he saying them to other girls? Younger girls? I told my boss and felt like a fool. I still had to awkwardly work with him. I ended up leaving one of my first jobs as a teenager.

At the age of 17, I was raped. When I confided in someone close, I was told that "That's what happens when you put yourself in bad situations". For years, in my mind, I believed them. It was my fault. And I had lost my voice.

My ill attempt at facing the situation (after a few self-destructive paths) was deciding I would never be a victim again. I was self-sustaining, tough, and trusted no one. I became a master at hiding my heart. I also had a very skewed perspective of who I was as a girl/ woman outside of being a sex object. Those lines were very blurred for quite some time. For awhile, I swung from being what I felt like men wanted me to be to being a complete man hater and not even allowing the opposite sex to open the door for me.  I was never going to let it happen again. I was never going to lose my voice again. I would just speak LOUDER and STRONGER and FIGHT HARDER. I. I. I.  All by my awesome self-sufficient self. Because if I would have just done a, b, c, and z...it wouldn't have happened once. Let alone the next time and the next and the... I tried to protect myslef and heal on my own.

The thing is, we can't do it on our own. Too often sexual abuse is something we chalk up as a norm for girls. Every one of us know of someone who has been abused or harassed in some way and so if it's normal it must be ok. If I've learned anything, it is that it is NOT ok. But it's not about woman power and banning together and burning our bras together and man bashing.

It's about coming to the feet of Jesus, in our brokenness, in our despair, in our desperation, in our cocoon that we have spent years and years and years building around ourselves for protection one thread at a time. Maybe. Just maybe, we can allow God to strip away each thread of false strength. Each self- built bandage and let the healing really begin. At our core. Because deep down out of that suffocating cocoon, comes forth life. Beauty. And Freedom.

So here I am, by the grace of Jesus, getting one wing out at a time, for my husband, for my little girls, and for me.

Mommy Truths: How you know you have a toddler

*  Being a mom with a toddler is "like having a blender without a lid" as pinterest so eloquently stated. Dang it. At times, I have to agree. BUT having a toddler is SO much more. They are full of life and wonder are constantly full of surprises.

*  You know you are a parent to a toddler when you have said "use your words" so many times in a day that you accidentally catch yourself saying it to an adult and better yet your spouse. Oops.

*  If little sticky fingers hand you wrappers, gum, jackets, cups, bugs, backpacks, broken toys, snotty tissue or tissue with other residue on it, ....you are a human trash can mama. And then two seconds later turn around for snuggles, high fives, tickles, thumbs ups, blown kisses, "presents", pictures of their scribbles and masterpieces, and their little hand to pray =)

*  When everything out of your mouth is taken literally. "Ruby you crack me up!" "But mommmmmmmyyyyy! I didn't break you into a bunch of pieces!"Or when those adorable responses turn into a somewhat embarrassing moment... Me to a friend: "I can't wait to spoil her!" (referring to her soon to be baby girl). Cute adorable literal toddler then becomes nearly hysterical: "Mommy!!!!!!!! You can't!!!!! You can't BOIL her!" Even after an explanation, apparently spoil and boil are the same thing. Good to know.

*  You know you are a parent to multiple kiddos when going to the bathroom is a license for the kids to bicker. And here you are sitting on the john (to which I imagine my toddler's response would be "Why are you sitting on Daddy?????") disciplining through the door...."Be nice to your sister!" But that just happens to other people.

*  A toddler having a fit (I call it being passionate) is a small glimpse at what I must look like to God at times. I had one right along with my 3 yr old the other day. We both shed a few tears together after a rough morning which thankfully is few and far between. Even if it's just down in my heart, how often do I have an adult "tantrum" of my own? When I dig my heels in and refuse to do what He asks because "I can do it". May I extend to my girls the same grace that He gives me. For their I- WANT- TO- DO -IT- MY- OWN- WAY moments.

* And last but not least, you know you are a mom to a toddler when you don't want to admit that your little one is no longer considered a toddler at all! Welcome to being a mom of a preschooler.
Posted by Lulu at 11:58 PM 1 comments

Lulu
I may wear a suit 4 days a week but I am a girl rocking converse with rainbow shoe laces at heart. I am pushing 30 (old I know) and trying to live life passionately and wholeheartedly as a wife, a mommy to three little girls (Ages 7, 3,&6 months), and a hearing specialist. There are times I do this awesomely (see I can make up words!) and times that I fail. So this blog is intended to be a place to share hearts and be real about the ups and downs along the way as well as sharing a little inspiration and creativity! I hope you find inspiration too!